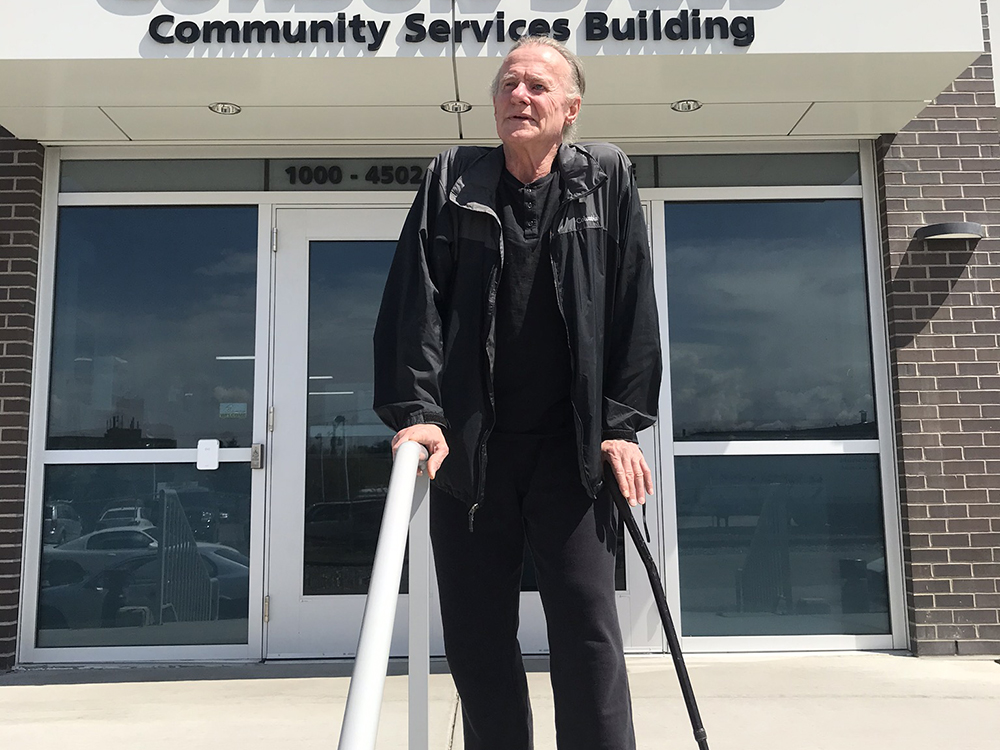 William: studying as a senior

When CJHS’s digital literacy instructor asked William if he had considered going back to school, he was surprised. “I thought, ‘I’m 60 years old and I spent 40 years destroying gray matter in my brain. How can I possibly do that?’”

Fast-forward three years, and William has done just that. He is eight classes away from earning an Addiction Studies Diploma from Bow Valley College.

Self-medicating
William’s family has a history of depression. “I come from a family where the illness has ravaged people,” he says. “I have several family members who’ve been institutionalized for major depression.”

To deal with his own mental health challenges, William began to drink. “When I was anxious, I would drink. Then I’m drunk, therefore more anxious. One feeds the other and it’s a vicious circle.” He would later be diagnosed with generalized anxiety disorder, which is characterized by excessive, uncontrollable and nearly constant worry about many different things.

Alcohol addiction took over William’s life. “I was physically addicted to it but, more so, mentally addicted.”
When William woke up in the hospital one day, he knew something needed to change. He decided to go to treatment.

Overcoming obstacles
William, sober now for three years, initially came to CJHS looking for help applying for a record suspension. Now he meets with CJHS’s digital literacy instructor regularly to help him with his computer-related needs for coursework. He was recently diagnosed with attention deficit hyperactivity disorder (ADHD), and feels that CJHS is the most effective resource for him in managing the challenges that come with it.

“Awareness is a big help in terms of dealing with ADHD,” he says. “And with the help from CJHS, it’s made school more manageable.”

School as a senior
Initially, William was self-conscious about being several decades older than the other students in his classes. “They’re young enough to be my grandkids!” he says. But, over time, he realized the other students respected him and the sense of inclusivity encouraged him to work harder.

William even met with a fellow CJHS client, who was interested in going back to school, to share his insight and advice. “It helps if you’ve been there,” he says.

Future goals
Since his ADHD diagnosis, William’s average has skyrocketed from a C to an A. “It felt good to have worked hard for something,” he says.

William credits CJHS for getting him started on this path. “They helped me learn how to use a computer and improve my self-esteem,” he says. “It’s helped me to stay sober.”

As an addictions counsellor, William hopes to work with older adults. “In my experience, older people with addiction tend to receive less help than the younger ones,” he says. “I think the old souls are worth every bit as much as the young souls.”

William is looking forward to using what he learns. “Having gone through it myself, and getting this education, I understand what addiction does to the mind, body and soul,” he says. “I’ve grown a lot and now I’m ready to be a useful citizen and help others.”

Attention deficit hyperactivity disorder (ADHD) is a chronic, neurobiological disorder that impairs daily functioning. There are three core symptoms: the inability to manage attention; the inability to regulate activity; and difficulty with inhibitory behavior resulting in impulsivity. Difficulty with regulating emotions is often an issue as well.

According to the Centre for ADHD Awareness Canada, because of these symptoms, youth and adults with untreated ADHD are at an increased risk for developing substance use disorder and becoming involved in the justice system. Studies show that the number of people in prison with ADHD is five times higher than the general population. In Canada, it is estimated that 33 per cent of inmates live with ADHD.